**The methods underlying these analyses are based on as yet unpublished research. To understand the basic theory and terminology, please see this site introduction.

Feb 2, 2014.  John Elway looks out over a familiar scene.  Streams of green and yellow confetti obscure the scoreboard, which reads 43-8. Elway’s former AFC West patsies slowly jog off the field, meeting instead the inward flickering vortex of press and fans.  Elway is thinking of Dan Reeves.

If someone asked you to name the single biggest advantage possessed by the Denver Broncos, not just this season but every season, what would you name? I’ll bet John Elway could tell you- it’s in the name of the stadium.  The Broncos play a minimum of 8 home games a year at 5280 feet.  The next highest altitude for an NFL stadium is 1,070 feet, at the University of Phoenix Stadium, in Glendale AZ.

This is an enormous advantage: to train at altitude, and have your opponents train 4000+ feet below you.

Elway just didn’t have time to put the pieces in place.  Having already hired Alex Gibbs away from the Seahawks in Spring 2013, Elway had to watch the blocking scheme he made famous- the one Alex Gibbs and Mike Shanahan co-created in 1995 and the one that Elway ran to perfection, winning Superbowls in 1998 and 1999- conquer his own Peyton Manning-led creation.

But he had already seen the writing on the wall.  Alex Gibbs was already in the building.

– Posterior Thoracic (lateral: A, medial: B)

– Anterior Cervical (lateral: A, medial: A-)

Paxton Lynch excels at running laterally and throwing with power and accuracy while keeping his eyes downfield.  His Posterior Cervical inefficiencies threaten an elevated risk of shoulder/ neck injuries, and his Posterior Lumbar- Thoracic overlap along the medial foreshadows some late-game stamina issues in the QB run-game. His medial Thoracic entanglements likely prevent elite-level pure pocket-passing (likely causing him to struggle throwing end-zone fades, for example)

However, Paxton Lynch is the biomechanically ideal QB for an offense that wants to stretch defenses horizontally.  His lateral efficiency is off-the-charts in almost every area, while his medial efficiency is notably high along the Anterior.  His arm talent isn’t #1 on its own (some QBs have better overall Thoracic efficiency), but in the context of a horizontally-moving pocket, I can think of no current NFL QB with a more powerful, more accurate arm.

So what did Elway see in Spring 2013 that made him hire Alex Gibbs- a man whose Zone Blocking Scheme was/ is fundamentally incompatible with the Manning offense currently being run by the team? When that same Manning offense that was just about to set the record books on fire during the 2013 season?

The Manning offense, for all its brilliance, relied on consistently-elite execution across the board.  Peyton Manning, over his career, didn’t change his basic play-set game to game (although Gase added some interesting late-career wrinkles).  Rather, he out-executed the opposing defense play by play, putting the ball in the softest coverage spot, and with the best possible timing/ accuracy.

But to out-execute your opponent every week is difficult, even for future Hall of Fame QBs like Peyton Manning.  All it takes is a little let-up (from the QB or from his teammates) to have a bad day against a great defense- especially one geared to stop your specific scheme.

So Elway changed the paradigm.  He looked to the name of the stadium.  And he hired back Alex Gibbs.

The best way to use the altitude to your advantage at Mile High is to force your opponents to run.  Eventually, altitude training will kick in and your opponents will start gasping for air. But how do you maximize an opponents’ running distance, when a first down is set at a fixed 10-yard vertical distance?

That’s the genius of the Gibbs-Shanahan Zone Blocking Scheme. The Wide Zone base play stretches defenses to the sideline on the play-side, while passing concepts built out of the same shell (utilizing the same initial blocking scheme) stretch defenses to the other sideline with bootlegs and rollouts.

At its original home at Mile High Stadium, the scheme becomes unstoppable.  Defenses are forced to run 10 yards sideways for every 10 yards they run backwards.  Eventually the altitude kicks in.

Dan Reeves was purely traditional- you ran up the middle on 1st and 2nd down, and threw the ball to the outside WRs on 3rd and long.  He ignored the huge inherent advantage to playing at Mile High Stadium.

So too did John Fox, by installing a fast-paced vertically-oriented gap-blocking scheme.  The 2013 record-breaking Denver offense certainly wore out opposing defenses, but their lightning-quick possessions also wore out their own defense.  By Superbowl 48, defensive all-stars such as Von Miller and Chris Harris were limping on the sidelines.  Peyton Manning’s offense, for all its brilliance, ignored Mile High Stadium’s singular advantage.

There are likely to be better QBs than Paxton Lynch if your goal is to out-execute your opponent.  But none will likely be more successful at zig-zagging to TDs (and running defenses out of the building).  Defenses will be running sideways until the crabs come home. 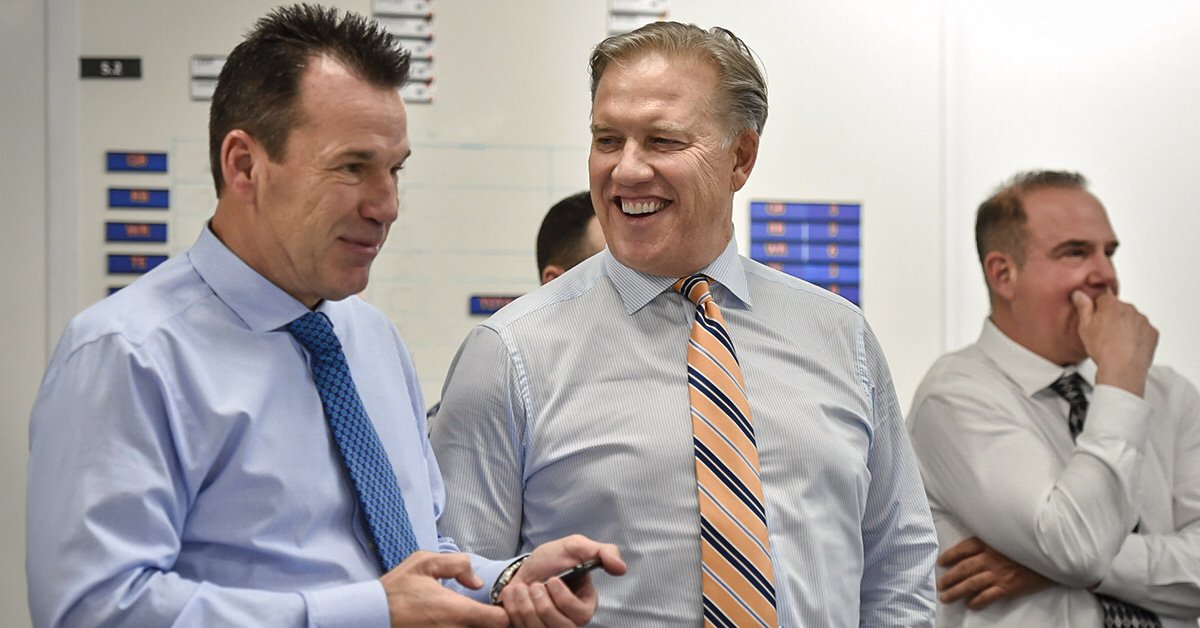 This is a picture of two guys who can’t believe their perfect weapon just fell into their laps.
Welcome to Denver, Paxton Lynch.